Yes! to Information, Integration and Acceptance

My son Matthew Gregory was born on November 2, 2007 in Yuma Arizona. He was a beautiful, playful and intelligent baby. At age one, he knew the colors, the numbers, the alphabet, and many other things.

At eighteen months he still did not walk, he did not talk, and almost did not sleep.  He became obsessed with things and did not want anyone to touch him. He was diagnosed with severe autism. At two years old, he was evaluated by a speech specialist who told me my son would never talk or do anything, and she referred to my son as “retarded.”  We started with therapies day and night; there was no time to lose.

My son wrote, painted, and enjoyed books at two and a half years old, and his intelligence grew greater.  At three years old, he made sounds, and at four he started to say some words, and he could recognize words in English and Spanish.  Although he cannot start a conversation, he sings like nobody can imagine.

...the impossible does not exist in his vocabulary

After being forced to go to school for almost two years, he turned down the school and is now homeschooled.  It is the best decision I could have made. Now he has an art teacher and I see my son happier than ever, even though he has few friends. He shares his joys, sorrows and frustrations with his teachers and therapists, his sister, and his parents.  His love for painting helps with his autism. He communicates through his wonderful artwork.  When Matthew is at his desk with his brushes and colorful paint, he sees the world in all its beauty and color. He translates images that he sees onto his canvases into beautiful works of art. 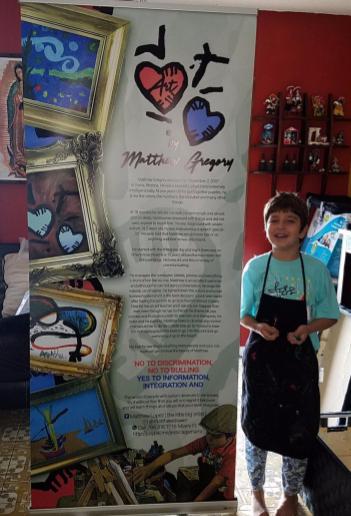 Matthew is a child who gives a lot of love and has made us see things and taught us that the impossible does not exist in his vocabulary.  I would like to see the speech specialist who told me that my son was “retarded” and that he was never going to talk. I would like to show her everything that my son is capable of and ask her to be more careful when giving an opinion and making an evaluation.

NO! TO DISCRIMINATION, NO! TO BULLYING

YES! TO INFORMATION, INTEGRATION, AND ACCEPTANCE

People with autism are human beings.  They deserve respect and to be accepted as they are, in their world and in our world. The world of autistic people deserves to be known.  Try to look at their world without fear and you will not regret it, because you will learn things and values ??that you never imagined.