The Ability To Do Something Special 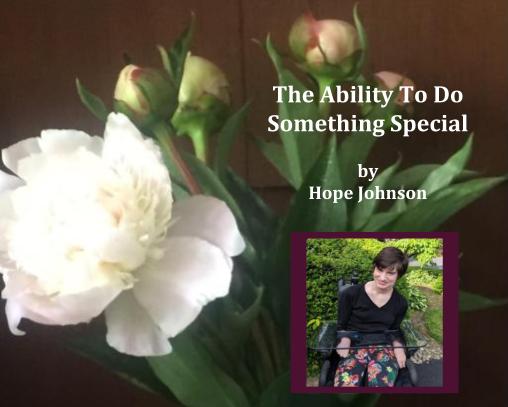 The capability to serve and help others proves to be the most rewarding goal in life.  It becomes even more special when there is a positive outcome.  To me, the most extraordinary thing that a person can do is to advocate for another.

Ever since I was a little girl, I have been a supporter of individuals with disabilities.  I loved to write, and this seemed like the most effective way for me to communicate, since I am non-verbal.  Having been introduced to communication devices at an early age, I also had the opportunity to share my thoughts. I could prepare speeches through my alternative speaking devices, pressing one button, and entire paragraphs would verbalize.  This made me feel like I could speak effectively.  However, if I tried to have a face-to-face conversation, it would frustrate me to no end because the process was so slow.

During this time, I spoke for organizations such as Prentke Romich, the manufacturer of multiple devices that I used, about how they had affected my life.  It made me feel good to share my experiences, and I hoped that someone would benefit from hearing my story. As time progressed, I found that using my device became tedious.  Under increasing pressure from school authorities to use my Liberator, I went further into my shell and started to doubt my abilities to do anything.  I was the "student" who always "nodded her head in response to questions," and that was deemed unacceptable.

During the first of my college years, I struggled to express myself altogether.  Advocating for others was the farthest thing from my mind.  While I still felt the passion, I did not have it in me to fight for others.  I had a taste of what life was like in the real world, and I was shocked.  After three years, I asked to come home. As I recovered, I thought about advocacy for individuals through the written word.  I realized that before I could accomplish my goal as a writer, I had to finish my education, and enrolled as an English major at Messiah College soon after. In my coursework, I was encouraged to delve into my feelings about my Cerebral Palsy through my writing and found that my professors and classmates responded positively.  I discovered that my thoughts about my disability had an impact on others, and felt as though I was advocating for individuals such as myself through my words.

After graduation from college, my first job was a columnist for The Carlisle Sentinel, spotlighting issues concerning the disability world.  From there, I went on to write for publications such as Central Penn Parent and Jason's Connections, to name a few. Recently, I interned at UniqueSource Products and Services, a local company near my home, which provides employment for disabled individuals.  I enjoyed completing my assignments in social media immensely, gaining a wealth of knowledge by doing so.

As I have discovered, the ability to help someone else is extraordinary— not only in the result but in the journey itself.

Diagnosed with Cerebral Palsy at birth, Hope Johnson is an honors graduate of Messiah College in English and a freelance writer.  Hope writes to promote general awareness about issues facing the disability community. Her mantra is that anything is possible with persistence, determination, and above all, hope.