Magic of Movement: Performance Artist Bill Shannon Changes the Way We Look at Dance and Disability

In this fascinating interview, Mr. Shannon talks about his life with a disability, his art, his dance, and gives his truly singular view of the world. Diagnosed with Legg-Calvé-Perthes disease when he was 5 years old, but he is first and foremost an innovative artist. 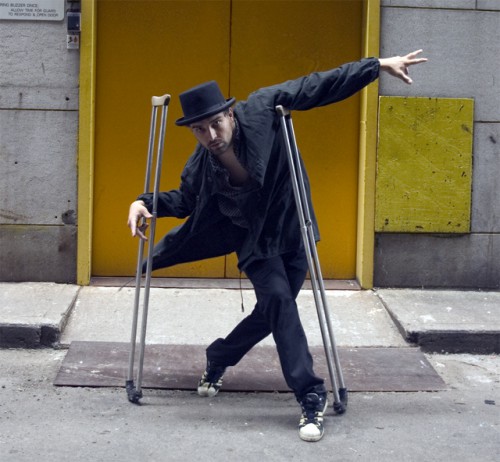 BILL SHANNON was born in Nashville, Tennessee in 1970. In 1975 he moved to Pittsburgh, PA where he spent the remainder of his childhood and adolescence.  In 1992 Shannon attended the The Art Institute of Chicago, earning a BFA in 1995.  In 1996 Shannon moved to NYC and immersed himself in the art, dance and skate cultures of Brooklyn and Manhattan while expanding his performance work to multimedia video installations, group choreography and the theater arts. Over the past two decades Shannon’s installations, performances, choreography and video work have been presented nationally and internationally at numerous venues, festivals and events including, Sydney Opera House, Tate Liverpool Museum, NYC Town Hall, Portland Institute of Contemporary Art, The Holland Festival, Amsterdam, Temple Bar Dublin, Kiasma Museum Finland, Hirshhorn Museum and many more. Shannon also completed a project with Cirque du Soleil where he choreographed an aerial duet and a solo on crutches for their 2002 production “Varekai,” which continues to tour into 2011. Shannon has been honored with a Newhouse Foundation Award a John Simon Guggenheim Fellowship and a Foundation for Contemporary Art Award among others. He has also received support for his work from the National Endowment for the Arts, the National Dance Project of the New England Foundation for the Arts, Jerome Foundation, New York Foundation for the Arts,  Arts International: The Fund for U.S. Artists at International Festivals PA Council on the Arts and others. In 2005 Shannon moved his family back to his childhood home of Pittsburgh Pa to participate in his extended families urban farming project, Wild Red’s Urban Farm.  Shannon, as of 2011, performs publicly on a project by project basis while also working on a book project, video installation and other new media and green materials projects.  Shannon continues the evolution of his technique of dance on crutches via spontaneous street skating sessions through the city to local spots with smooth tip surfaces.

For a downloadable podcast of this interview, please visit: http://jasonsconnection.podbean.com/e/magic-of-movement-performance-artist-bill-shannon-changes-the-way-we-look-at-dance-and-disability/?token=a87f3328fa8a787b24fa69431d683ae9