In this fascinating interview, Ms. Jekel talks about the MYCincinnati program, what arts education means to kids, and her passion for classical music. 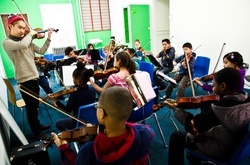 MYCINCINNATI was founded in August 2011 by Laura Jekel, a classically trained cellist with international teaching experience. Laura spent a year studying El Sistema’s methodology and philosophy as part of a prestigious fellowship through the New England Conservatory in Boston. The fellowship included a five-week residency in Venezuela, and visits to 10 other El Sistema-inspired programs across the country. MYCincinnati is a program of Price Hill Will, a non-profit community development corporation that is committed to the revitalization of the Price Hill neighborhoods. Price Hill Will covers all overhead costs for MYCincinnati, and provides administrative support. As far as we know, MYCincinnati is the first El Sistema-inspired program in the US to partner with a  CDC.  In its first year, 19 students met for 2 hours every day after school at the Roberts Academy, a public school and Community Learning Center in Price Hill. Students performed 8 public concerts around the Price Hill neighborhood between October 2011 and May 2012. The inaugural year culminated in all MYCincinnati students of 40 of their family members traveling to Cleveland to perform a joint concert with El Sistema@Rainey.  Throughout the year, MYCincinnati participants and their families attended various concerts around the city, including the Cincinnati Symphony Orchestra, Chamber Music Cincinnati, and a concert at the Cincinnati Conservatory of Music. MYCincinnati’s summer camp included a visit from three Cincinnati Chamber Orchestra musicians who performed and taught.

Cellist Laura Jekel was one of 10 people chosen to take part in the 2010-2011 Abreu Fellows Program, a training program through New England Conservatory that is helping to develop El Sistema-inspired programs in the United States. Originally from Boston, Laura has performed and taught throughout Latin America and the United States. After earning a bachelor of music degree at Indiana University in Bloomington, she traveled to Ecuador where she was a member of the Orquesta Sinfónica de Guayaquil and cello professor at the music school Fronteras Musicales Abiertas in Cuenca. During her stay she gave masterclasses and recitals around the country, including performances of the Dvorak, Schumann, Haydn C Major and Lalo cello concertos with the Orquesta Sinfónica de Cuenca, the Orquesta Sinfónica de Loja and the Cuen-K Ensamble. Aside from her solo and orchestral work, Laura is an avid teacher. During the summer, she has been the cello teacher at Encore/Coda, a music camp in Maine. Since returning from Ecuador in 2007, Laura has studied at Carnegie Mellon University, where she completed her master of music degree, and at the Peabody Institute.