The West Coast is about to experience some of the best films about and made by those with disabilities and mental illness. Comprised of eye-opening and one-of-a-kind movies, the films showcase points of view unlike any other in mainstream media. Festival goers from California and all over are encouraged to attend, to learn, and to understand someone else’s perspective.

This October 15-19, the Bay Area and Oakland, California will 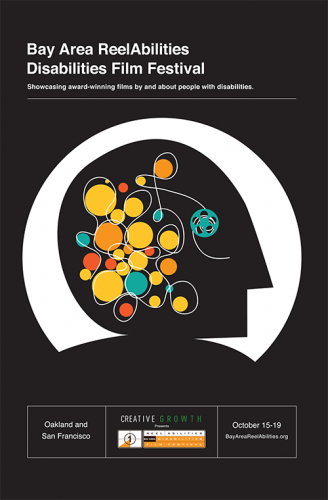 host ReelAbilities for the first time.  [reelabilities-program-1] Creative Growth has partnered with ReelAbilities to bring outstanding international feature films and shorts that serve to better understand the contributions and issues of a broad spectrum of people with disabilities. The films are visually compelling and artistically interesting portals into a diverse group of stories and expressions of from those with disabilities.

In addition to great films and stories, speakers, panels, and Q&A sessions will be held before and after the films. Audience members become engaged and even part of this unique festival. Jason’s Connection’s own co-founder, Jason Harris, will be speaking at the event.

Check out the Film Schedule.

Creative Growth is the oldest organization of its kind, located in Oakland, California. At 40 years old, Creative Growth was natural partner to bring ReelAbilities to the West Coast. Their mission is to serve adult and young adult artists with developmental, physical, emotional and mental disabilities, providing a creative and supportive environment for artistic exploration, gallery promotion and personal expression. They currently support 152 artists alone!

ReelAbilities is a national film festival, the largest of its kind, that focuses on promoting awareness and advocacy of those with different abilities through stories. Initiated at the JCC in Manhattan, in 2007, the festival presents award winning films by and about people with disabilities in multiple locations throughout each hosting city.

The New Parkway Theater in Oakland will act as the home venue as the deYoung Museum and New People Cinema in San Francisco will host screenings. 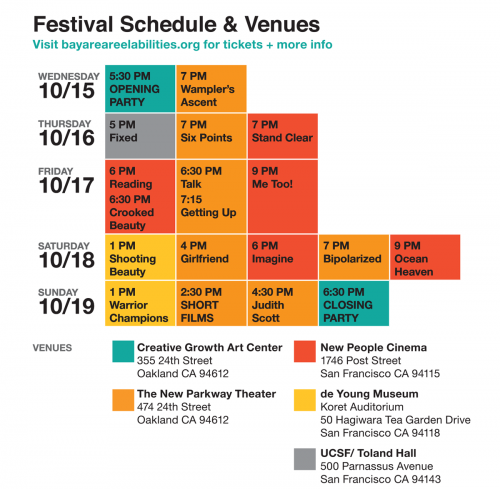 Our own Jason Harris will be speaking after the film Standing Clear of the Closing Doors. Also look for Sascha Altman Dubral, who will be speaking about his book Maps to the Other Side: The Adventures of a Bipolar Cartographer. Check out the full list of amazing speakers lined up for next week!

Just a few of some must-see Films lined up include:

Steve Wampler’s amazing climb up  El Capitan Mountain in Yosemite. Due to his severe cerebral palsy, he climbed the mountain in pull ups. Steve Wampler will be speaking before the film.

The Journey of  Ross McKenzie finding alternative medicine to his daily lithium dosage. When McKenzie was first diagnosed with bipolar disorder, he was originally told he’d be on lithium all his life. But he soon found another, better way as well as insight into the Pharmaceutical industry.  Find out more about BiPolarized.

A interesting film diving into the discussion of modern relationships, Daniel, a recent college grad with down syndrome, forms a strong friendship with his co-worker Laura. But soon the relationship becomes complicated once Daniel confesses he’s fallen in love with her.  (Spanish Film)

An epic tale of how 4 Iraq War veterans working to achieve an almost impossible dream: to compete in the Olympics. Will they make it?

Stand Clear of the Closing Doors

A Tribeca Film Special Jury Prize. An outstanding movie about a young teenage boy with Autism who gets lost in the NYC Subway system after his sister leaves him to get home on his own. Ricky struggles with weakness from hunger and observing various urban pathos as his family tries to locate him in the massive underground labyrinth.

Get your tickets today!