A Purple Disneyland for Epilepsy Awareness

This November 6th, Disneyland will be a sea of purple. Anyone who wants to, can help make that happen.

The 2nd annual Epilepsy Awareness Day will be held at Disneyland in Anaheim, CA. 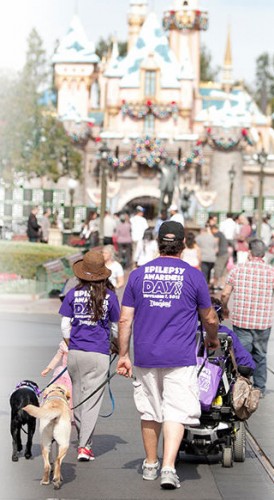 Participants can get involved by purchasing a ticket and a special event packet, which includes a purple shirt, entrance to the park, a special tote. When purchased through the online web store also gives a $5 donation to the partner of your choosing!

This is all in recognition for Epilepsy Awareness Day, a vision from co-founders Dr. Diane Stein MD and Brad Levy of AskDrStein.com

Stein and Levy saw a great divide amongst the epilepsy community, as well as a stigma placed those that had epilepsy. In order to unite the community together, Stein and Levy have put together two back to back events on Nov 5 & 6.

First on November 5th, they are holding the Epilepsy Awareness and Education Expo, which is a free event with participants from all over the country.

The EXPO will feature over 30 non-profit Epilepsy support groups, hospitals with Epilepsy programs, Vendors who service the Epilepsy community, and a schedule of guest speakers including physicians and company representatives.

The goal for the EXPO is to give the Epilepsy community a chance to unite, as we do the following day at Disneyland, only at the EXPO, guests will have ample time to network with other families who share similar conditions, learn about new treatments and products, and hopefully, create long term relationships with others which would prove this event to be a success.

That’s when’s it’s time to paint Disneyland purple, figuratively speaking of course. Those who want to raise awareness for epilepsy can join in on the fun wearing a purple shirt and riding the rides at Disneyland. 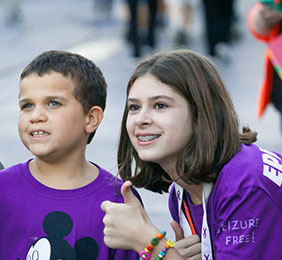 Epilepsy Awareness Day at Disneyland Resort 2014 will take place on November 6, 2014 during normal park operating hours. We will be outside the park for a meet-and-greet at 9am, and the park will be open from 10am-8pm for a day full of fun, photos, and fellowship! This event is for people of all ages with Epilepsy, their families and friends, and anyone else whose life has been touched by Epilepsy, as well as anyone who wants to raise funds or awareness for Epilepsy.

In attendance will be over 3,000 epilepsy awareness supports including families, doctors from private practice (co-founder Diane Stein MD) and teaching hospitals / epilepsy centers (such as fron UCLA, CHLA and NYU), leaders of many non-profit groups (such as FACES, Dravet.org, TACA), and leaders from industries associated with epilepsy research and treatment.
Visit the official website for more info!